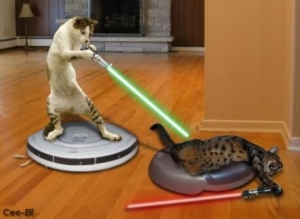 Let’s talk cat fur management, often a losing battle!  Luckily, I found it in the form of the Roomba!

At first, I hesitated to buy a “gadget” that vacuums my house at the touch of a button.  Luckily, we have wonderful neighbors that not only lend us a cup of sugar when we need it but let us take home and test drive their Roomba, who they’ve named “Sonny”, for a week.  It may be true that we kept “him” for longer but that is unconfirmed.

Since the effort on vacuuming with Sonny (the Roomba) is relatively low, I thought I would take full advantage of this opportunity and vacuum every other day or so.  After the first week, I noticed that not only were our floors considerably cleaner than they would be if all the effort of vacuuming was on my chore list but also there were no dust bunnies in the corners where they usually lurk, usually appearing only a few days after the last pass of the vacuum.  The proof was in the pudding, I was sold!

The price is a little steep and harder to justify when you already have a working vacuum so the next step was to find a good deal.  I searched the usual suspects, Kohl’s (with a coupon), Bed, Bath and Beyond and everything that Amazon had to offer but nothing was meeting my expectations of a ‘deal’ yet.  Then lo and behold, I wake up one morning, shut off the alarm and check my email (a terrible habit that I’m fully aware of) and what do I see?  Amazon sent me an email telling me all about the great deal on a Roomba they had for that day.  True it was, this was a deal.

After shaking off the feeling that Amazon was watching my every move, I bit the bullet and ordered our Roomba, who is appropriately named “Cher”.

She arrived merely days later and we set her up, got her charged and took her for a spin.  She met all our expectations and more.  It seems that this was a slightly different model with better room navigating skills and a quieter vacuum.  Surprisingly, the cats don’t mind Cher at all but they act out a scene from Planet of the Apes when Dicky the Dyson comes out of the closet.

Not that it needs to be said but a vacuum that allows you to sit on the couch and play laser with your kitties while keeping the cat fur at bay gets a four paw review from this pet parent!