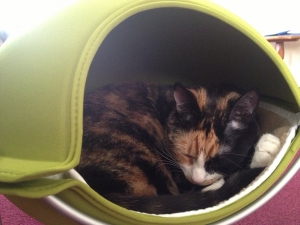 As it normally goes, I was eyeing up the next feline-oriented purchase, trying to decide if it will be a major success or snubbed like the pile of orphaned toys it the cat toybox.  I don’t remember where I first saw the Hepper Pod but instantly thought it was awesome.  Any piece of cat furniture that’s aesthetic and functional is a win-win, so here’s our Hepper Pod review!

Since this is more of an ‘investment’ piece, I had to decide which color I would want for the long term.  In the process of deciding, Hepper released limited edition color choices which were very cute!  So if you don’t see something that will work in your space, just wait and there may be a color for you.

I also thought this would be a good escape for Tinkerbell when Tidbit is annoying her with her over energetic “kitten charm” as I call it.  As you can see, I chose the green.  It arrived quickly and was very easy to assemble, despite both kitties interfering for the sake of nosiness.  One of the features that I certainly appreciate is the removable/washable liner, as I try to keep sleeping areas as fur free reasonably possible.

Immediately after I was done with the assembly, I prompted Tinkerbell to hop in and she checked it out, hung out for a bit then hopped out and let Tidbit have a turn.  As I suspected, later that night I found Tikerbell fast asleep in it!

This has proven to be a good escape for her, however, Tidbit sometimes ‘attacks’ the pod itself.  Although mildly amusing, it annoys Tink, so now I have some training to tend to.  Overall, cute addition to the living room and both cats have granted it their seal of approval, evident by many pod-naps.